escaped previous interpretations. The passage is:

But, before plunging into it, I’d like to call the attention to the

But I detect two more allusions: the philosopher “Plato” and Italian

“Pilato” (Pilatus). And I think that this points to the fact that the

previous speech was made by Shem, who expressed his negative

position towards mathematics and algebra, leading only to chaos

new page, but it seems that the “idealistic philosopher” (Plato) is

not likely to do it, to waste his time on such menial affairs

(HYPOTHESES OF COMMONEST EXPERIENCES) and he’d rather

stay clean, wash his hands “that count” (Pilatus like),

(APOTHEOSIS OF THE LUSTRAL PRINCIPIUM), put aside HCE

and prepare himself for the “Platonic” interpretation of ALP, the

female principle. And probably not giving much weight to Thomas

form concepts. Mathematical entities are idealizations made by

way of abstraction from our knowledge of sensible things. It is

knowledge of sensible things which is primary and thus prior to

the “order of learning” the philosophical sciences.”

brother to dismiss the cardinal “packnumbers” he was so fond of,

having first given the due attention to “Paco Hunter” of the

corresponding left margin note: “Vive Paco Hunter!”, in which we

find the already mentioned initials (VPH) of the luxurious Victoria

Palace Hotel, in Paris, where Joyce now and then used to live. But

since our Paco is in correspondence with

we are entitled to interpret “hucksler” as a whore (hustler), selling

her “wares/wears” in the street like a “huckster”, and “Wellington’s

Iron Bridge” recalls both Wellington (the Iron Duke) and the bridge

that leads to Bachelor’s Walk. Now, in our case, “bachelor” has at

least a double meaning. It may be a “chaste” young man; or an old

unmarried womanizer walking after whores, in Paris. Let’s get back

to Paco, a common Spanish name that derives from Latin “PAter

COmmunitatis” (the Father of the community). We are entitled to

see in him a Spanish Father who is a Hunter (very likely of girls),

like the Spanish Don Juan; but probably a hunter of heretics (the

rebellious sons) and of witches as well, like a Spanish Inquisitor.

(There is indeed an ironic touch. Paco is connected with Franciscan

friars, since it is the nickname of St. Francis. But inquisitors were

“Paco hunter” may indeed be a Dominican friar.) But “Paco

Indian princess “notable for her association with the colonial

settlement at Jamestown [WP]”. So we have a “virgin” princess

settled in the town of James (the Paris of Joyce). But this “maid”

seems to be somewhat impudent and shameless, since her name

In conclusion: an old and shameless Don Juan hunting a brazen girl

who could be his daughter and chasing away his insurgent sons. Or

a young “chaste” Dominican (Shaun type), a witch hunter, who

rejects the advances of a sinful and shameless hustler.

which introduces the “triangle” theme. I won’t touch here the

geometrical allusions, which are the most obvious and usually

treated at large; but I’ll try to point out, as best as I can, the

“political and historical side” of the sarcastic confrontation

between the twins, made explicit by Footnote 1:

manifest in the subtly hidden acrostic of the right marginal note:

which is a clear anagram of ITALIA (Italy). With a series of

allusions to the confrontation between Shaun, the “ingenuous

(candid)” brother and the libertine Shem; a confrontation that will

be “strong and continuous” (tenacious), laborious and highly

sophisticated (ingenious) in its argumentation. But most of all I’d

like to underline the many references to “fascism” and its “nazi”

connections. “aquilittoral” is not only the obvious “equilateral”,

and not only the “littoral zone” where “ankles” are alternatively

washed by the water (Italian acqua) and then left “dry”; or where

“Enkel” (German “grandchildren”) haven’t yet had the nerve to put

their feet in; but it hints specifically at Italian “aquila” (eagle) and

at “littoriali”, which were cultural, artistic and sports events for

University students, that took place during the fascist era.

bundle of wooden rods, sometimes including an axe with its blade

“Probe loom” hints, among other things (amongst them, a quite

amusing ironic “pro Bloom”, which could be a “polemic” anti-nazi

German word for “proof”, so a “proven” and “looming” scrutinizer

salivarium” is indeed intriguing. McHugh points to an oblique

“thumb in his mouth”, hinting at the “babish”, childish attitude; the

is, namely the mouth. (In fact it is the thumb which, together with

the index, is used as a compass to trace one of the two circles of

page 293. It is he thumb at the mouth of the river, the Lambda

point, so brilliantly illustrated and explained by Clive Hart in his

“Structure and motif in Finnegans Wake.”

But “hand-toe” is the yoga position of “Utthita Hasta

which has an astounding resemblance with the nazi “goose step”.

And “sole salivarium” (nazi SS apart) has another fascist

reference. “sole” is Italian for “sun”; “saliva” in this case may be

connected to the verb “salire” (to ascend, to rise, to go up). “saliva”

is “he/she/it was rising”. So the fascist Roman image is that of a

amply used by the fascists for their propaganda, because of its

(Oh sun that rises free and full of joy

over this Hill of ourn, tame there your horses;

you will not see throughout the world a thing

In case you have historical curiosities you may hear a version of it:

But I think that “salivarium” hides Joyce’s spiteful “spit” towards

Fascism and Nazism with their goose steps (handtoe) and their

bombastic marches (soles, soil). But there are still more Roman and

The verb “concoct” is quite unusual, coming directly from Latin

“equus”, which can be both a horse and a donkey (up to you to

decide who is Shaun and who Shem; probably both, since the

white-black “zebra” as well belongs to the family Equidae). Thus we

have “equal” perspectives (angles) joined in a trilateral, zebraic

horse-donkey, doubly linked to the “trillitter” which hints at the

that his trilateral and triliteral Delta (ALP) be not trasformed by

his sons into a cooked-up “cocotte” (whore). That’s French for

derives from the Mycenaean Greek “i-qo”, we may detect an

(cocotte) and Equidaes. An image which recalls a blasphemous

Witch’s Cauldron, where the father and the son (the tizzer and

the tongs) of the Trinity are turned into firebrands (tizzer :

“tong”, literally “hall, gathering place”), with its songs sung in a

secret language (tongue). All this taking place around the mythic-
matical (mythametical) mother, whose secret is both hidden

(mimetic) and enlightened by the “tripods” of her sacred altar;

sacred secrets that must be revealed, at least according to the Italian

the small altars), in fact “to reveal one’s guilty secrets”.

Here we may give a look at the left marginal note:

The boss’s bess bass is the browd of Mullingar

where we may find the Boss (Father) whose wife (bride of

Mullingar, Chapelizod), his very pride (browd), is in fact a

malingering “broad”. And a fish (bass) boiled for “broth”; the best

one of the Mullingar brothel. And the best ale (Bass’s ale – with its

is in fact the ale of the “boozer”, morphed into a “dishwatery” broth.

ensuing fight will certainly be not without serious consequences.

Gregory Bateson (beatsoon), in his work “Naven: A Survey of the

Problems suggested by a Composite Picture of the Culture of a

[Note, please, the three points, like those of a triangle.] Of course

this is not the place to expound on this topic; thus let it be sufficient

to know that that ritual develops what Bateson, in his book, called

behavior consisted of a competitive relationship between

and submission). [WP] Which expresses clearly both the twins

and the father/twins relation. And this justifies the “fascist” touch

and its imagery, since fascism is deeply influenced by a rebellious

attitude towards the bourgeois establishment (the decadence of the

old regime) and, most of all, by the exalted excitement of the new

generation. It’s not a case that the official hymn of the Italian

National Fascist Party – and the unofficial national anthem of Italy

and for the good name of Italian poetry I’ll spare you the verses. 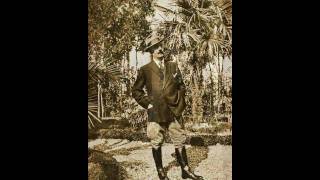 The link I gave in June is no longer good.

Here is one good today